Cook’s CTO, Levi Daily, and Jason Hanlin go way back. When Jason asked if Levi would donate his time to create a website for a grassroots movement for his friend, an NFL star Odell Beckham Jr., neither had any idea it would explode in such a positive way. Jason created the t-shirt and Levi constructed the website…one Instagram post by Odell Beckham Jr. and BOOM, the movement went viral. Dozens of celebrities then reposted from Tom Brady to the Kardashian girls, even the King, Lebron James, posted about it. Two weeks later they had sold over 13,000 t-shirts and raised $400k, with all the profits being donated to Black Lives Matter. But that’s not the whole story. Surprised by the massive success, both Jason and Levi now had to fulfill…as in package and ship all the orders!

Enter Cook Solutions Group’s community outreach program, Cook Community Builders. Cook donates 16 hours of paid time to each CSG employee and this was a great time for a dozen or so of them to cash in. Forming an impromptu assembly line, practicing social distancing, and routinely washing their hands, Cook and Jason’s team were able to fulfill every order in just under 48 hours. How is that for community teamwork!

Thank you to all the CCB staff involved that dedicated their CCB hours to “make it happen” in true CSG fashion!

For more of what Odell Beckham Jr. is doing, check out The Bigger Picture with OBJ, Cam Newton, Todd Gurley, and Vic Cruz. By the way, the videographer is our own CTO, Levi Daily, again donating his time. 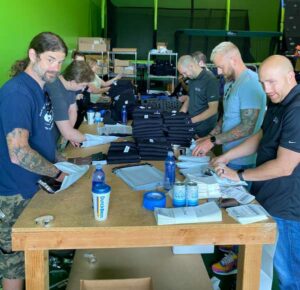 Like what you see at CSG? Enter your info and we'll follow up!
Your message has been sent. Thank you for getting in touch with us!
Sorry, something seems to be missing. Make sure you have filled in all the required fields.

Our home office and headquarters office is open: